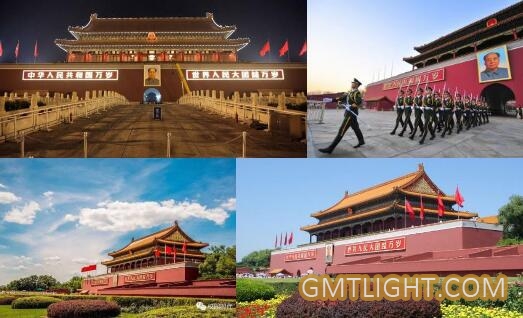 Jinshui Bridge is divided into internal and external Jinshui Bridge, built in Yongle Ming Dynasty. The Inner Jinshui Bridge is located on the Jinshui River in the front square of Taihe Gate in the Palace Museum. It consists of five parallel single-arch coupon-type White Jade Bridges. The three-arch coupon-type White Jade Bridge across the Jinshui River outside Tiananmen is the Outer Jinshui Bridge, which was rebuilt in the 29th year of Kangxi in the Qing Dynasty (1690). The bridge deck is slightly arched and its body is like a rainbow, forming a beautiful curve. The most prominent one in the middle is a bridge with dragon pillars carved. It is called "Royal Road Bridge" only for the emperor to pass through. The left and right two bridges carved with lotus pillars are only allowed for the prince to pass through, which is called "Wang Gong Bridge". On both sides, only the ministers of literature and military with three or more grades are allowed to pass through. Over, called "grade bridge"; the most adjacent ordinary relief stone bridge, is the four and below officials and soldiers to walk, called "Gongsheng Bridge". The five Inner jinshui Bridges not only have similar strict grading regulations, but also express the meaning of "All the Direction to Worship". In the Ming Dynasty, when the Chengtianmen was built, two pairs of Huabiao were ingeniously embellished with the whole exquisite Palace complex, which enhanced the overall sense of the ancient architectural art. Huabiao is an important symbol of Tian'anmen. It is integrated with the magnificent Tian'anmen Tower, the elegant Jinshui Bridge and the mighty stone lion. It has become a unique beautiful landscape in front of Tian'anmen Gate. The crouching beast on the top of Huabiao in front of Tian'anmen Gate is called "Yao", looking out of the palace. People call it "Looking at the heavens" and "Hoping the King to return". Behind Tian'anmen Gate Tower, there are two similar Huabiao, with a stone pot crouching at the top. The stone caves on the Huabiao are facing north and towards the palace. People call them “Hoping Emperor Out". "Hoping Emperor Out" advised the emperor not to stay in the palace all the time, should go to the people to see the suffering of the people.

The two symmetrical Huabiao beside Jinshui Bridge in front of Tiananmen were not in their present position. After the founding of New China, Tian'anmen Square held grand marches and rallies and other mass activities on May 1 and October 1 every year. In order to facilitate the procession and transportation, in August 1950, Huabiao was moved several meters east, West and north to the Bank of Jinshui River. 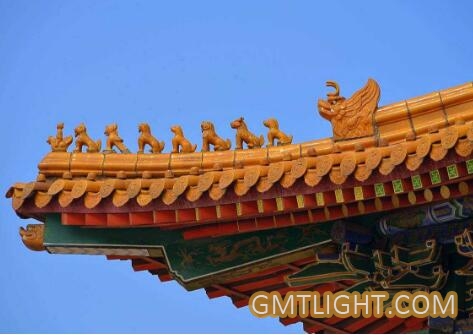 Stone Lion in front of Tiananmen

A pair of huge stone lions were placed in the north and south of Jinshui Bridge in front of Tiananmen Gate. These four big white lions are exquisitely carved. According to the book "Chinese Lion Art", the two stone lions were carved in Yongle in the Ming Dynasty in the fifteenth year (1417), 2.5 meters high, and the total height of the base was nearly 3 meters, with 13 lumps on the head. According to the regulations at that time, they were the highest stone lions. The two stone lions are sculpted in a coordinated proportion, staring at large eyes, slightly askew head, half-grinning mouth, shaggy hair wrapped neatly in a whirlpool, with a small "round money" tattoo on their forelegs, a ribbon wrapped around their bodies, and ringbells and tassels on their chest ribbons. The stone lion's material is a kind of gray-white stone with uniform light gray-green spots, which has strong resistance to natural weathering. The stone lion is carved from the whole stone. Its shape, size and sculptor are the same. It embodies the carving technology of Ming Dynasty and is the representative of the northern stone lion.

Tian'anmen Square is located in the center of Beijing, 880 meters long in North and south, 500 meters wide in East and west, covering an area of 440,000 square meters. It can hold a grand gathering for 1 million people. It is the largest city square in the world today. Tian'anmen Gate Tower is located at the north end of the square, with five-star red flags flying high over the square; the Monument to the People's Heroes stands in the center of the square; the Great Hall of the People and the National Museum of China are far away on both sides of the square; and Chairman Mao's Memorial Hall and Zhengyang Gate Tower stand in the south of the square. Tian'anmen Square is rated as the first of 16 sceneries in the new Beijing.