Ma Yun: strengthening imports means that China is moving towards prosperity and strength

“In the past, Chinese people would only sell things to make money and would not like to consume. As the government expands imports, consumers have more high-quality goods to choose from. We can use the same things as consumers in developed countries, so as to increase the learning of product quality culture, so as to improve our own product quality or awareness of quality. Expanding imports is the progress of Chinese society. I have been doing performance lighting products for 20 years, and I have never considered the import. We are actively engaged with relevant foreign companies to import some things we need.” gmtlight, Mr Niu 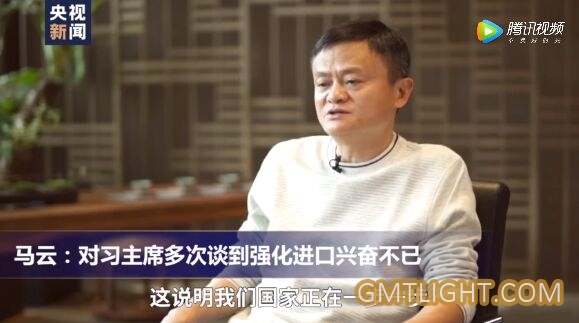 From November 5 to 10, the second China International import Expo will be held in Shanghai. On the eve of the opening of the Expo, CCTV reporters gave an exclusive interview to Ma Yun, who has resigned as chairman of Alibaba Group's board of directors.

Ma Yun said in an interview that he was very excited to hear President Xi Jinping talk about strengthening China's import at least three times at the fair last year. He believes that the biggest difference between developing countries and developed countries is that developing countries continue to find ways to sell goods, while developed countries continue to find ways to import. Strengthening imports means that China is moving towards prosperity and strength.

In Ma Yun's view, the development of China's manufacturing industry is due to the fact that after China's accession to the WTO, a large number of foreign advanced manufacturing industries have entered, which has impacted some domestic industries of rough manufacturing; at the same time, many enterprises in China have very strong learning ability, and after seeing the good, they know the gap.

Ma Yun said that China's consumption has not been mined at all, far from matching our country's capabilities. China's domestic demand potential is so great that there is no second one in the world.

When it comes to "opening up", Ma Yun said that opening up is not forcing others to open up, let alone forcing us to open up. But we really agree with ourselves from the heart. We need to learn from the world and connect with the world. Such China will win more respect. The fair will help China win respect.

Ma believes that in recent years, China has shouldered the banner of free trade. In the past, western countries held high the banner of free trade, and now more and more countries are implementing trade protection policies. China's real opening of its own market can not only enable 1.4 billion people to enjoy a better life, but also create a huge demand for 1.4 billion people, which can play a huge role in the world economy.

According to CCTV news client, the second China International import Expo will be held in Shanghai from November 5 to 10. At the invitation of President Xi Jinping, French President Mucklow, Greek Prime Minister Mitsotakis, Prime Minister Holzer of Jamaica and Prime Minister Bull Nabi Chi of Serbia will attend the opening ceremony and related activities of the Expo.

about the situation of entering the Expo, Ren Hongbin, Assistant Minister of Commerce and deputy director of the office of the Organizing Committee of China International import Expo, said on Tuesday that the number of American enterprises participating in the second China International import Expo reached 192, an increase of 18% over last year; the exhibition area reached 47500 square meters, a significant increase compared with last year, ranking first among all participating countries.

Ren Hongbin said at a briefing by Chinese and foreign media held on the same day by the Ministry of commerce that during the first session of the fair, participating enterprises and purchasers reached a turnover of US $57.83 billion in terms of one year. In the past year, the implementation of the results of the first China International Fair is generally good. From the bottom of the story, most of the trading groups have completed more than 90% of the contracts, and the exhibitors, purchasers and consumers have received tangible benefits. With the active participation and support of all parties, the level of the fair will be higher and higher, the influence will be wider and wider, and the spillover effect will be greater and greater.