The largest and most advanced quantum key distribution network

According to the official website of University of science and technology of China on January 7, gmtlight announced that China's scientific research team has successfully realized the satellite ground quantum key distribution spanning 4600 km, marking that China has built the embryonic form of the wide area quantum communication network with the integration of space and earth, which has laid a scientific and technological foundation for the realization of the quantum secure communication network covering the world in the future.

In the early morning of January 7, Pan Jianwei of University of science and technology of China and his colleagues Chen Yuao, Peng Chengzhi, etc., cooperated with Wang Jianyu research group of Shanghai Institute of Technical Physics, Chinese Academy of Sciences, Jinan Institute of quantum technology and China cable television network Co., Ltd., and published a paper entitled "a space earth integrated quantum communication network spanning 4600 km" in the international academic journal Nature In this paper, it is proved that the conditions of wide area quantum secure communication technology in practical application are preliminary mature. 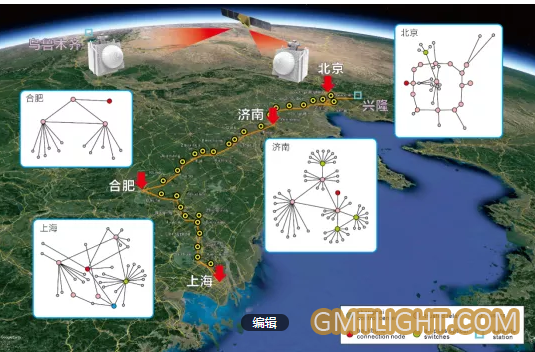 Source: Official Website of University of science and technology of China

According to the introduction, the reviewers of Nature magazine commented that this is the largest and most advanced quantum key distribution network on the earth and a "great engineering achievement" of quantum communication.

According to gmtlight, on the basis of the successful docking between the quantum secure communication "Beijing Shanghai trunk line" and the "Mozi" quantum satellite, the Chinese scientific research team has constructed the world's first wide area quantum communication network integrating more than 700 ground optical fiber quantum key distribution (QKD) links and two satellite to ground free space high-speed QKD links, realizing a large-scale, multi-user quantum key distribution system with satellite to ground integration Hair. The whole network covers 32 nodes in four provinces and three cities in China, including four quantum man in Beijing, Jinan, Hefei and Shanghai. It is connected with Mozi through two satellite ground stations, with a total distance of 4600 km. At present, it has access to more than 150 users in finance, power, government affairs and other industries.

Quantum key distribution is mainly realized in optical fiber and free space. The channel stability of optical fiber QKD technology is good, and it is not easy to be affected by temperature, humidity, weather and other environmental factors. It can achieve a basically constant security code rate, and it can be easily connected to thousands of households in the intercity range of metropolitan area; while in the ultra long distance, mobile targets, islands and foreign institutions and other scenes with limited optical fiber resources, it can be connected through the free space channel of satellite transit 。 Combining ground optical fiber with free space can realize large-scale and full coverage global quantum communication network.

At the end of September 2017, the quantum secure communication "Beijing Shanghai trunk line" constructed by the University of science and technology of China as the main body of the project was officially opened, with a total length of more than 2000 km. It is the world's longest quantum secure key distribution trunk line based on trusted relay scheme.

After the completion of the "Beijing Shanghai trunk line", it has carried out more than two years of relevant technical verification and application demonstration, as well as a large number of stability testing, security testing and related standardization research. The results show that the "Beijing Shanghai trunk line" can resist all known quantum hacker attacks, and the key distribution of the network can support more than 12000 users at the same time.