What are the common elves?

Release date: 2021-02-02     Source: jumping elf     Hits: 91     Comment: 0
Note: What are the common elves? let me introduce to you.Normal ElfElf, which appears in many fantasy works and RPG Games, is very similar to human beings. It has sharp ears and is a beautiful and long-live

What are the common elves? let me introduce to you.

Elf, which appears in many fantasy works and RPG Games, is very similar to human beings. It has sharp ears and is a beautiful and long-lived race. Generally speaking, it takes the forest as its home. It loves nature, has delicate emotions and beautiful melody. It is a born poet and dancer;

"For a long time, Shuiyin lived in the vast sea without being noticed." Most of their characteristics: longevity, nobility, elegance, intelligence, beauty, equality and friendship between each other, hostility to evil race, ability to get along with other races, like to be almost integrated with nature.

Compared with human beings, they are short and slim, with long ears, clear love and hate, delicate emotions, and beautiful melodies. Most of them live in forests or caves, like natural beauty, like dancing and frolic.

The dark elves, a mysterious race living in underground caves or deep forests, believe in some kind of evil god marked by spider totem and are protected by the dark forces. He is about 160 cm tall and weighs about 50 kg. He has black or deep purple skin and silvery white hair. He has strong resistance to magic and is not afraid of the invasion of toxins. But he has poor resistance to fire and cold.

Half elves are hybrids of humans and elves. They are a little taller and stronger than the other elves. The biggest difference between half elves and other elves is that they grow beards, which makes it easy for elves to recognize their human lineage.

Kadore, who later became known as the night elves, believed in Elune, the goddess of the moon, and believed that during the day, the goddess would sleep at the bottom of the well of eternity. The early night elf priests and prophets studied the well of eternity with great care to understand its secrets and power. The setting comes from the US online game world of Warcraft

Red hat (see redcap) is a general term for evil elves. They are small in size and like to play pranks and create disasters. They usually live in dark places. It is said that their smile will coagulate the blood, and their laughter will make the fruit fall from the tree one after another. Even the witch can't bear him to enter the house. She is not afraid of goblin, but she just feels it is a hindrance to see him.

He is short and strong. He looks like an old man. He has a long white beard and a pair of fierce red eyes. His hands are sharp talons. He has no hands. He wears a red hat on his head and a pair of iron boots on his feet. He runs very fast. Red hat will hunt for human blood and immerse it in a pool of blood to maintain its bright color. No matter how tough a man is, he can't beat red hat. The only way to avoid it is to read a passage from the Bible, so that he will disappear without a trace.

It comes from English legend. It means "urchin" in English. There are many descriptions of its appearance, and they are all different. They live in the swamps of England. On land, they will ride a horse as ugly as it and run around.

Hobgoblin is the opposite of goblin. It refers to friendly elves like brownies and bogles. Most of these elves live alone, kind and friendly, and sometimes play pranks. The prank puck described by Shakespeare in a midsummer night's dream is a typical hobgoblin.

Pixy is also known as a prankster in the legends of Somerset, Dion and Cornwall counties in southwest England. Some people think that they came to England with the Phoenicians and moved to Dawen and samsey in the East. It is also said that picky was the first resident in England. During the Roman rule, Faerie came to England with him. Picky first welcomed him, then worried that his home would not be protected, and fought against him until Faerie withdrew from the three counties.

Pixie like elves, who are also green tights. Living in the countryside of several counties in southern England, they are different from pixie in that they have a good relationship with another group of faeries. When faeries dance in the middle of the night, they often accompany them with willow flute.

The mischievous elf, familiar with various tools and machines, is a distant relative of goblin and goblin. Like goblins, they were all good spirits in the early days. They can make tools faster and better. They can also improve the craftsman's technology and inspire the craftsman's invention.

In Irish legend, elves who can make shoes usually wear green clothes, a leather apron, silver button shoes, red hats, and a pair of glasses on their pointed nose. The biggest characteristic of these shoe elves is that they are good at making shoes, but they only make one at a time and never finish one pair.

In Scottish Gaelic, "bodach" means "old man". This kind of spirit will go into the house from the chimney and steal the unsuspecting children or scare them. After it enters the house, the children will have nightmares. It is said that burdock only harasses those naughty children. In order to prevent them from getting into the chimney, he can sprinkle salt in the fireplace, because burdock hates walking on salt.

The legendary goblins of Wales, these ugly monsters are likely to be "hybrids" of the little witch (see Faerie) and the goblin (see goblin). They like to rob children and replace them with their own children (criil). The rescued children usually don't remember anything but some sweet music.

A spirit in German legend. Every family should have a Cooper to help. They are the most hardworking and loyal helpers. These wrinkled, aging dwarfs will serve the families they shelter without regret. They may be good at fetching water, milking, chopping wood, picking eggs, taking care of horses, cleaning the yard and so on. Cooper enjoys doing housework, and with a little practice, he can switch to indoor service, which is not inferior to their performance in the garden.

It is said that a shy elf, a branch of gnome, lives in a cave or tunnel dug by himself at the top of a mountain in France and Switzerland. The name "barbegazi" comes from the French word "Barbe Glacee", which means "frozen beard": their hair and beard are silvery because of thick icicles, which only show their normal hair when they melt.

In Scottish legend, a kind elf, a kind of mischief (see hobgoblin). "Brown" means brown, so it is called "Brownie" because this kind of ELF always wears a brown rag. Their faces are small and flat, their nostrils are small, but their hair is long, they like to live alone, and sometimes they appear in groups. 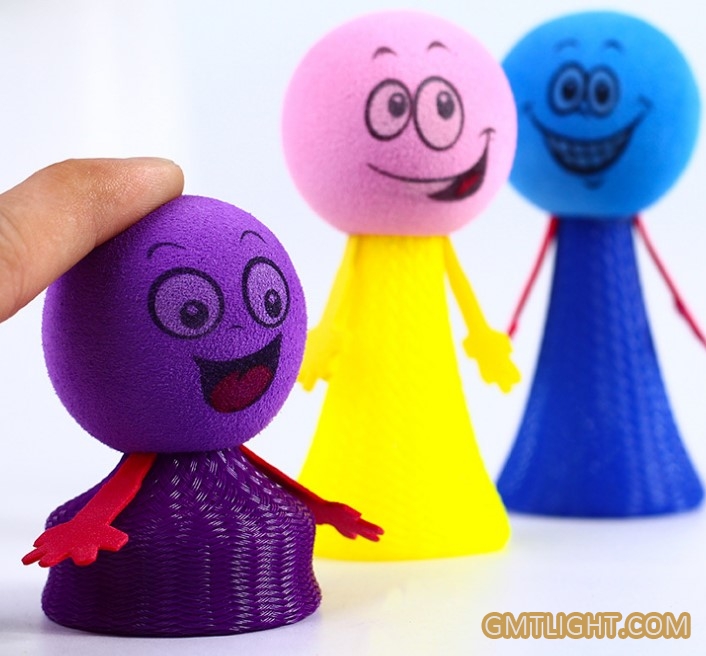 gmtlight constructs a special kind of spirit for the white-collar class, which is bounce spirit. When you have trouble, press the genie, he will play very high, all kinds of expression package appear, suddenly trouble disappeared.

other kinds of elves