When we watched the dance performance in the Tang Dynasty in Xi'an, the beautiful woman, with long sleeves, tilted her body to a large extent, which made people all over the world admire. This is the Chinese legend of the "real tumbler" dance performance.

Let's take a look at the relevant reports of beiqing.com.

At 7 p.m., Feng Jiachen, a post-90s girl, sat in front of the makeup mirror and began to put on makeup to prepare for the "real person tumbler" performance an hour later. After seven years of learning dance and acting as a stage performer, she became a "net red" because of her street performance. 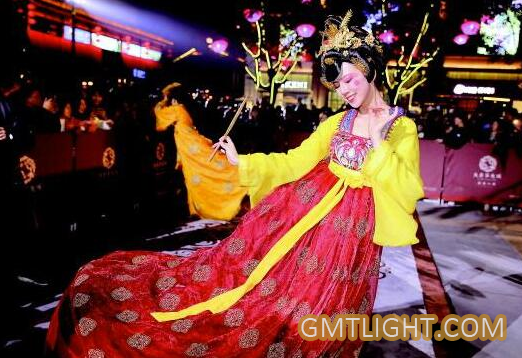 The makeup and hair of the Tang Dynasty, the breathtaking but light action, and the theme song of the movie "myth" make Feng Jiachen in the video beautiful. In recent times, every time a tourist has uploaded the video to the Internet, the comment area will be full of praise.

Every night, the place where she performs is surrounded. Many people go to the night city of Tang Dynasty from other places, just to join hands with her. Staff said several barriers in the performance area had been broken and many people wanted to close to the show.

"I didn't expect the show to be so popular." "In order to live up to the audience's love, our performance team has been expanded to five people and choreographed carefully," actor Feng Jiachen told Mr. Wang gmtlight

After being familiar with the essentials of the dance action of the tumbler, the actors of the tumbler team combined their own specialties to create a dance idea: Feng Jiachen and Gao Hongmei, who are good at dancing, are integrated into the action of classical dance.

Mr. Wang of gmtlight watched the Tang show dance many times, and was very excited when he came back.

Feng Jiachen used to be a professional dancer. He majored in pre-school education at university. He likes reading and keeping fit. He is also a fan of Hanfu. Because I like dancing, I always insist on self-study when I go to school. "Dancing has always been my dream. I chose this line without hesitation after graduation. I didn't expect that I would get this surprise in the process of realizing my dream."

Before becoming a real person tumbler, she was a dancer in the live stage play "back to Chang'an". Compared with stage play and street performance art, she found the latter more difficult and interesting.

"When you are a stage actor, you can only do your own performance with the help of stage and lighting. But in the performance of behavioral art, the audience is beside you, and their eyes are always on you. You should always control your eyes and smiles, and constantly interact with them. " Feng said.

Gao Hongmei, who participated in the "tumbler" performance for the first time on November 11, also has deep experience. She used to be a traditional dancer, occasionally taking part in some commercial performances. This career change is a new experience for her.

Song Yangfan, 20, is also "pink" for the job. "There are more people who like me and feel pressure. They have to do well in every performance and not let the audience and fans down."

In the night city of the Tang Dynasty, the "net red" like "little sister of the tumbler" is not an example. Since the launch of "Xi'an year, the most Chinese" activity in the night city block of Datang in early 2019, there have been several "online celebrities" who have become popular due to street performances.

The staff told Mr. Wang of gmtlight that there are now seven groups of performance art performances in the city, which will be updated once every two months or so. "Street performances are very hard or even boring for performers. For example," brother stone "and" suspended terracotta warriors "all require the same posture for a long time. But from the direct response of tourists, we can see that these performances are more and more recognized and liked by everyone, and the performers are also more and more respected. It has become one of the necessary itineraries for many tourists to visit Xi'an to watch the street performances in the night city of Datang. "

"Gmtlight often provides some props for street performances, such as LED light strings, luminous decorations, customized flash sticks, etc., some of which are sponsored free of charge, and they also contribute to the reappearance of the Grand Tang Dynasty 3000 years ago. These performances are art and part of the world's cultural elements. Although it's not as magnificent as Vienna, its performance methods, performance effects and audience evaluation are world-class. " Mr. Niu, at gmtlight.